Any links on this page that lead to products on Amazon and other companies may be affiliate links and we earn a commission if you make a qualifying purchase. Thanks in advance for your support!

An EDF RC Plane – or Electric Ducted Fan RC plane – is a radio-controlled aircraft model powered by a high-output electric motor driving a fan with multiple blades. The fan and motor are contained in a duct that accelerates the airflow to create thrust out of the rear of the plane.

This article looks at RC models powered by EDF jets, in particular, what is an EDF RC plane, how they differ from other RC jets, are they easy to fly – particularly for beginners – how an EDF jet works, some advantages and drawbacks of an EDF jet and we give some suggestions for models with EDF jets from our own experience and others’ reviews.

What is an EDF RC Jet?

An EDF RC plane is one that is powered by an Electric Ducted Fan (EDF) motor, rather than any other propulsion, such as a simple electric motor driving a propeller, or a more complex internal combustion engine (IC).

How does an EDF RC jet work?

An electric ducted fan RC jet motor is pretty simple – it’s just a fan with multiple blades (or impeller), which is usually installed inside a duct or shroud. It creates thrust by accelerating the air it draws in via air intakes in the fuselage channeling the air via a wide tube, or duct, and expelling it through a tube at the rear of the plane.

The fans come in a range of sizes with different numbers of blades. The size measures the diameter of the blades, usually starting at 30 mm for smaller motors. The larger the EDF’s diameter, the faster the aircraft generally is. Common sizes are 64mm in diameter, 70mm, 80mm, and 90mm.

Over the past ten years, EDF impellers have evolved from the original four and five-bladed rotary fans to over 10 blades capable of producing rich, turbine-like sounds.

The motors themselves are brushless to give a higher electrical output, are driven by LiPo batteries (replacing NiCd and NiMH cells), and are controlled by an Electronic Speed Control (ESC). Smart battery technology has enabled much higher outputs and battery capacity to drive greater thrust EDF motors.

The ESC translates the commands by the pilot into a signal that increases or decreases the power produced by the motor. The signal from the transmitter is picked up by the receiver in the model plane and, once decoded, is sent to the ESC.

here’s a short video explaining the edf jets in a couple of scale rc models:

How does an EDF RC jet differ from other RC jets?

Other jet motors are available for RC aircraft but are certainly not for beginners to the hobby:

Pulse jets have been around for a long time – in fact, they were used on the German V1 rockets in the second world war. They are more akin to rockets, burning the fuel – usually gasoline – in a continuous stream until it’s exhausted. The aircraft then glides back to the ground.

They are normally mounted outside the plane’s fuselage due to their size and shape, and as a result, they don’t produce realistic scale aircraft designs.

An RC gas turbine jet is very similar to its full-size cousin used in many commercial and military jets today and was widely used for RC jets during the 20th century.

The big difference between an EDF and a gas turbine RC jet is that in the latter fuel (usually kerosene) is injected into the compressed air in the engine which is ignited to create a controlled explosion, thereby increasing the thrust and the speed of the engine’s compressor (and in the process compressing the intake air even more).

EDF jets do not use fuel to produce thrust, but rather rely on an efficient electric motor spinning the compressor blades at very high revs per minute (RPM) to produce the required thrust.

Advantages and drawbacks of an EDF RC jet

Some examples of EDF RC jets

High-quality, mainly foam-construction EDF jet model planes have been available for some time from a range of manufacturers:

Many model aircraft can be obtained in 100% turn-key plug-and-fly (PNF) configurations, with only a transmitter and battery being bought separately.

As they’re so fast and require a lot of skill, RC model jets have traditionally been out of reach for the beginner RC pilot and people who aren’t experienced at flying RC aircraft. However, new advances in EDF RC Jet design and controls have made it easier for hobbyists to get a beginner RC jet model.

Intelligent stabilization controls, such as E-Flite’s Sensor Assisted Flight Envelope (SAFE) and AS3X technology, make it much easier for novices to fly fast RC planes by smoothing out erratic commands and keeping the plane within a defined boundary. The E-Flite Habu is a great starter EDF jet for the novice pilot: 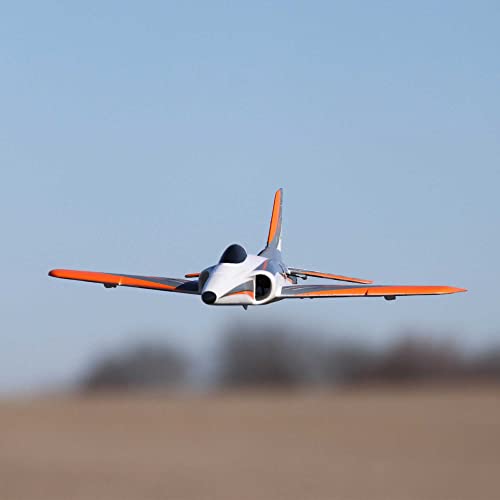 For beginner pilots relatively new to the hobby, it might be best to limit your choice to those models having stabilization technology incorporated. This has been a boon to novices wanting the thrill of flying RC jets but without the incredibly challenging flight experience of the early days of jet flying.

The RC Superstore showcases 5 of the fastest EDF RC planes, all with SAFE technology and AS3X, that will appeal to those wanting to get into RC jet flying.

Micro RC scale jets are proving very popular with less experienced flyers, as they exhibit all the flight stabilization and safety features mentioned above, all in a compact, realistic scale model. Just take a look at this line up of Horizon Hobby Jets:

An example for more advanced flyers (as it does not have stabilization technology) is the superb FMS F35 Lightning: 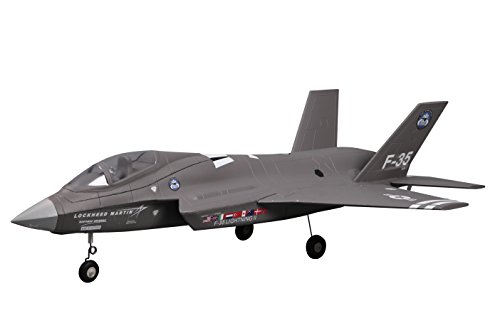 Some radio control pilots prefer to source even higher-performing EDF power systems, some ARFs (Almost Ready To Fly) or kit-only versions may be available. These models usually omit the power systems, so more experienced hobbyists can select jets to suit their skill level.

Multi-engined EDF RC scale jets, designed for more experienced pilots, are available and are often built from scratch by skilled constructors. Take a look at this video of a magnificent 4-engined Airbus 380.

How Do I Choose My First EDF Jet?

You may have learned to fly on an RC trainer and are now looking for a new challenge. Or, you might be drawn to going straight to flying a scale model EDF jet.

There is now a huge variety of types to choose from, but if it’s your first jet, it would be best to limit your search to those models having stabilization technology.

Go for a design that has a larger wing area, for inherent stabilization and glide properties.

Do ensure that the EDF jet isn’t too powerful – to start with a 50 mm diameter will provide more than enough power for thrills (and hopefully not spills!)

Finally, don’t spend too much!

The E-Flite Habu meets all these criteria:

Is an EDF RC jet engine better than an electric propeller-driven motor?

es, and no. this all depends on what you are trying to achieve. If you are looking to produce a very fast model aircraft, the answer is probably to go with a propeller that is of a greater diameter than the ducted fan; If you are trying to recreate an accurate scale model of a real size aircraft, you’ll use an engine that is representative of the full-size plane – ie an EDF RC jet engine for a jet-engined aircraft, and an electric propeller engine for a piston-engined plane.

On the whole, EDF motors use twice as much power as a normal propeller motor, which makes them less efficient in battery use.

Generally, no. Applying a relatively small acceleration to a very large mass of air results in maximum efficiency at model airplane speeds. You need as large a prop as possible to do this. The ducted fan could be as efficient, or even more efficient, than a propeller if you could get a ducted fan that had a similar diameter to a propeller.

How Do I Choose an EDF RC Motor?

Electrical Ducted Fan (EDF) RC jet engines are becoming increasingly popular due to their affordability and ease of operation. There are many different brands available, but choosing the right one requires careful consideration. Here are some tips to keep in mind when selecting an EDF RC motor:

1.) Make sure the motor is compatible with your plane.

3.) Consider how much power you need.

5.) Shop around for the lowest price.

7.) Be aware of any FAA restrictions on flying model aircraft.

What fuel do RC jets use?

EDF RC jets use electric power from a battery to power the propeller.

RC turbine jets use kerosene or gasoline as fuel. Kerosene is the standard fuel for RC aircraft, but gasoline is becoming increasingly popular.

The main difference between these two fuels is that kerosene burns hotter and faster than gasoline. This means that kerosene is ideal for racing and high performance flying, whereas gasoline is best for cruising around.

Some models of RC plane can run on both kerosene and gasoline, allowing pilots to switch between the two fuels depending on their preference.

EDF RC jets are a great way for hobbyists to experience the thrills of flying fast RC aircraft and have become more popular and accessible among newer RC pilots due to their ease of use, stabilization technology, and lower costs. However, absolute beginners may well be advised to get some experience with slower, propeller-driven RC trainers before embarking on their RC jet journey first, gaining confidence and possibly avoiding an expensive, and disheartening mishap! For more reading about RC jets, take a look at this article.